A Brief History of Nopal Cactus 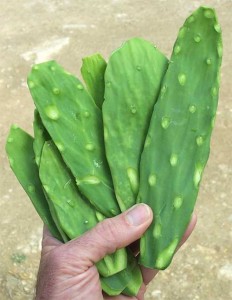 The Nopal cactus, and the fruit it bears, has been around over 12,000 years. It has been eaten, through this time, for its dietary benefits. The Nopal cactus is also known as the “prickly pear” and its fruit, which is actually the prickly pear, is also known as a cactus pear, Indian fig, etc. This fruit is formed when the flowers of the cactus wither away and is known as “Tuna” in its native Mexico. The Nopal cactus grows so well in Mexico because of the nutrient rich volcanic soil. The flat pads of this cactus are actually the stems for the flowers, which become the fruit. These pads can grow in size of from four to 16 inches long and up to nine inches wide and ¾ inch thick. They are used as vegetables and can be sliced, diced, etc. The white needles can be an inch long and the little short, furry looking ones on the fruit are not furry – they are very sharp and will plunge into the skin with a mere touch. More than a hundred species of this cactus exist and each has it own flavor of fruit. They all contain large amounts of vitamin C. One fruit has about 1/2 the amount of an orange.

Some consider the Nopal cactus as a weed and a nuisance. It”s a commercial commodity to others, for both their health benefits and edible qualities. The people of Mexico have been eating this cactus, in their regular diet, since before the days of the Spaniards.

The stems, petals, seeds, fruits, and flowers all contain nutrients like: Vitamins, minerals, and protein and antioxidants.

Though still being studied, there is evidence that the Nopal cactus has the capability to help in the following areas:

Side Effects of Nopal Cactus

Since Nopal Cactus is an everyday staple food in some areas, it is widely considered safe to eat. Supplements may have a few mild side effects, such as:

The Napal cactus, when mixed with water or other liquid, becomes a sticky, gel-like coating and expands (like a sponge) when wet. This could interfere with the proper absorption of medicines, or the nutrients of other foods and supplements. So, it is best to wait two hours before or after using or eating the Napal cactus or by-product. Always check with a physician before taking supplements if pregnant, nursing or have any medical problems.

For more in-depth information, check out these sites: www.thenopalcactus.net and www.nopalexport.com